HomeSportsThe armies ruined the anniversary. Dynamo beat the champion in a...
Sports

The armies ruined the anniversary. Dynamo beat the champion in a retro derby 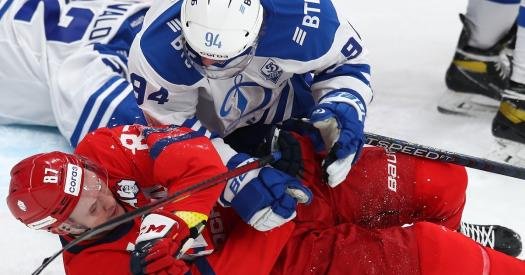 The blue and whites got their revenge on CSKA in their 1,000th KHL game.

Today the hosts remembered Vsevolod Bobrov, who would have turned 100 on December 1. However, the legend is also related to Dynamo, however, football. His goalscoring exploits on the historic UK tour are not forgotten. The guests prepared better for the derby and deservedly achieved victory, albeit with a minimum score of 2:1.

The champions lost the previous match in Yaroslavl 1:3. In all aspects.

– We lacked a couple of successful rebounds, – commented on the failure of CSKA head coach Sergei Fedorov.

Today a rebound (from the foot of blue and white captain Mironov) ambushed Plotnikov and sent the puck into an empty corner. This is how the hosts responded 35 seconds later to the second goal of the Swedish Lilja, who skillfully played hockey tennis under the nose of goalkeeper Sharychenkov.

The blue and whites dominated the movement remarkably and easily maintained a minimal advantage in the time remaining until the final siren. After the game, Commander-in-Chief Alexei Kudashov praised not only his team, but also the opponent. Apparently, for the defeat. Dynamo extended their winning streak to five games. CSKA, for its part, expects a trial at the home of the SKA leader (December 28), on the 30th – for Lokomotiv, and on January 3 – another, already the third derby with Dinamo in the season.

Fedorov expressed confidence that by the time of the army derby his wards would draw the right conclusions. Well, it will be more interesting to see the clash of the most principled rivals of recent years next Wednesday.

The Red-Blues made their debut today as full-size right-handed defender Yarosh, who came over from Omsk. I got into the champion team, which is called from the ship to the ball. The 26-year-old Slovak started with an effective serve, which was converted into a goal by Belarusian Skorenov, who was delighted to score.

After that, the blue and whites touched the crossbars, luck in these episodes smiled on Sharychenkov, who recently defended the goal without substitutions. However, in St. Petersburg, Yaroslavl and today he cannot control the rebounds. However, it will be a lie to accuse him of defeats. In addition, he acted with inspiration against SKA, despite the “brother-in-law” of striker Zykov. Fedorov hinted that a change in the number one spot is not worth waiting for on Wednesday.

And that night, Lokomotiv defeated Spartak in Yaroslavl and secured second place in the Western Conference not only in terms of points scored, but also lost. It is very likely that the railway will have to meet in the playoffs, like the previous two years. And the advantage of playing at home can be crucial.

Share
Facebook
Twitter
Pinterest
WhatsApp
Previous article
The director of the Donetsk Philharmonic held a master class in the Tomsk swimming pool KXan 36 Daily News
Next article
Europe tries to “fill” Russia with alcohol: you will be surprised who did it