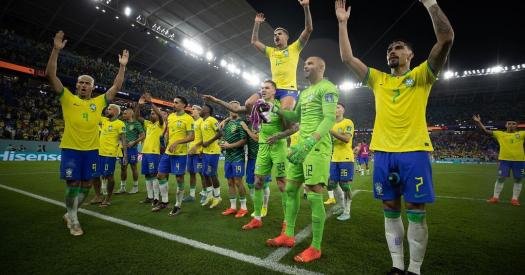 After every World Cup, the heads of most national team coaches traditionally fly. And then local officials begin to actively create, hoping to change the alignment of forces on the football chessboard in their favor. The World Cup in Qatar was no exception.

The Brazilian national team at the beginning of the main tournament of the four years was called the main contender for the cup. But the team, which for the past six years has been led by Tite, stumbled in the 1/4 finals and a penalty shootout. The head coach couldn’t help but resign, and on the same day. For the Seleçao, the game against the Croats was a “painful defeat”, as Tite put it. The five-time world champions and one of only two teams to win the World Cup twice in a row, of course, expected more. In addition, the last gold for the Brazilians occurred in 2002 and since then they have not been able to take this height again. Until now, the main achievement of the ‘five-time champions’ in the last 20 years is still fourth place in the 2014 World Cup.

Not surprisingly, the Brazilian Football Confederation (CBF) decided to take this problem seriously and approach it from a different angle. Experts from other countries were rarely invited to mentor “canarinho”. To be more precise, only three times in the history of the national team. Now the CBF management decided to try their luck, even in Europe. As recently revealed, among the candidates for the vacant position of head coach of the five-time champions are José Mourinho, who, due to conflicts with the Roma board of directors, is thinking of leaving the club this summer; Fernando Diniz, who currently directs the Brazilian Fluminense; Carlo Ancelotti, willing to leave Real Madrid at the end of the season if all his demands are met in Brazil and Luis Enrique is currently unemployed.

Despite the fact that after the departure of the Spanish team in the round of 16 of the World Cup in Qatar, the Royal Spanish Football Federation (RFEF) did not renew the contract with Luis Enrique, who led the Red Fury since 2018 and took it to the final of the League of Nations, for Brazil, Enrique is a priority option. The president of the Brazilian Football Confederation, Ednaldo Rodríguez, plans to meet the Spaniard in person this week during his trip to Europe (where he will apparently be on a business trip for former captain and national team leader Dani Alves, who seems to be trapped in Catalonia). for a long time). According to local media, the CBF management is ready to offer Lucho a contract until 2026. If this happens, a truly interesting tandem awaits us. And although Enrique, after his resignation, said that he was taking a break until next season, and then only thinks of working in clubs, leading the five-time world champion is an interesting challenge. Certainly more interesting than moving the long-term mentor of Atlético Madrid from his throne, where Luis has been an active guest for the past few months. In addition, in the Spanish championship, Enrique, who has won nine trophies with Barcelona, ​​​​including the Champions League triumph, should already be bored. By the way, the Canarinho legend Ronaldo, who a few years ago became the owner of the Spanish club Real Valladolid, acts as an intermediary in the negotiations between Lucho and the Brazilian Football Confederation.

The only one who is currently extremely negative about Luis Enrique’s candidacy as coach of the Brazilian team is Luis Felipe Scolari – in fact, the main “culprit” of the Brazilian team’s victory in the 2002 World Cup, as well as the “gold” of the 2013 Confederations Cup. And his opinion will have weight.

– That won? It is said that he is a very good coach, but he lost everything, said the former coach of the Brazilian team the other day, commenting on the possible appointment of the Spaniard. “But Mourinho won,” added Scolari. So, the alignment of forces in the fight for the opportunity to lead the “five-time champions” is approximately understandable. In addition, the “Special” has ambitions to try himself in the national team: in December, Mourinho was about to agree to become the head coach of the Portuguese national team, but something did not work out.