HomeSportsThe top scorer in the RPL changed his last name and went...
Sports

The top scorer in the RPL changed his last name and went to Samara. Sychevoi (Pisarsky) himself insisted on this choice. 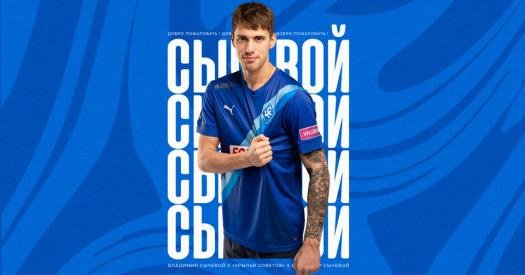 Five months ago, 99.9% of Russian fans did not know Vladimir Sychev, and in the fall all of Russian football was talking about him. In the first part of the season, the nameless from Orenburg became the top scorer in the RPL – 14 goals in 15 matches. Spartak player Quincy Promes shot the same amount, but it took him more games (16) and more time (1440 minutes versus 1078). In terms of rate of fire, Sychevoi produced a “wow effect”: on average, it took him just 77 minutes to score a goal.

The striker also performed well in the environment, let’s say, accompanying him. All the sports media covered the moment he proposed to his girlfriend right during the match right after the goal against Sochi. On another occasion, he prepared a T-shirt with the inscription “Dad, mom, I love you” and the surname “Pisarsky”. He said that’s his stepfather’s name, and he’ll take it at the first opportunity.

This will happen in the spring, but not in Orenburg. Even before the World Cup break, it was clear that in winter there would be a demand for a footballer. I assumed that Sochi or Akhmat would be interested in fast forwards, who are good in space, and the media wrote about Lokomotiv’s interest, but a week before the new year, Sychevoi gave himself a gift by signing a contract with Wings of the Soviets. More precisely, this became officially known, although a few days ago there was talk of a similar development of events.

Orenburg can be satisfied with this case. Sychevoi came to the club just a year and a half ago, in July 2021. His transfer then cost about 5 million rubles, and now Orenburg claims that they sold the striker up to 20 times more expensive, that is, 100 million. And still they sold it: transfermarkt estimates the player at 2.5 million (about 171 million at the current exchange rate). A unique case for the price of a 26-year-old footballer to skyrocket so rapidly.

I think that the management should give 5 million rubles of these 100 million to head coach Marcel Licka. It was he who prepared the team’s game and made a splash in the RPL with attacking football. Thanks to this brilliant style, players began to open up. Consequently, they quickly increased demand and prices rose.

The Samarans leadership is also to be commended for this transfer. In general, “Wings of the Soviets” under sports director Sergei Kornilenko revels in the modernity of their economic model: they bought younger and cheaper, sold more expensive. Yes, this is a risky strategy, because at a distance it is impossible to buy players cheaply without fail. Even CSKA Evgeny Giner eventually began to make enough miscalculations, although he used to be considered a role model. And the mistakes are, in addition to economic failures, also sports ones. And if the army team was punished for the absence of European cups, then for the Samara scale this is the risk of possible relegation.

For now though, these are all theories, because Wings of the Soviets are great for picking players. Last season they successfully sold Ivan Sergeev to Zenit and Danila Prutsev to Spartak, and last summer they sent Anton Zinkovsky to Spartak and Vladislav Sarveli to Sochi.

It was not possible to replace the leaders without pain, and according to the results of the first part of the season, the Wings were in 11th place, and yet there is a general impression of progress, because new players with potential take the place of retiring leaders. Thus, in the summer, the Dynamo central defenders Roman Evgeniev (according to Transfermarkt, for the ridiculous amount of 25 thousand euros) and Spartak Ilya Gaponov arrived. Also, the talented Maxim Glushenkov was bought from Spartak for 1.8 million. But there is still Sergei Pinyaev, who has tremendous potential, and not only all Russian clubs, but some foreign ones are already looking at him.

What is important, with such agreements, Samaraños create for themselves the image of a team that can become a springboard for the further development of a football player. A smart player will accept losing some money if he understands that tomorrow it will pay off with stable practices and offers from rich teams. This reputation already exists. It is significant that, according to Vladimir’s agent, Viktor Panchenko, it was the attacker who insisted on moving to Samara, although his representative wanted a “higher-ranking team, and it was possible” for him.

DO NOT REPEAT THE FATE OF AGALAROV

As for the KS’s own offensive line, Pisarsky’s main competitor (it’s time to get used to calling him that) will be 23-year-old Glushenkov, who has become the main attacking force of the team. The vast majority of attacks ended with their attempt to break through. Hence 4.1 hits per game (leader of the RPL in this indicator along with Promes). Also, there’s Dmitry Tsypchenko, but he’s still inexperienced at the end (0 goals this RPL season), so he’s clearly a rotation player.

It is important that Vladimir does not become the second Hamid Agalarov, the top scorer of last season, who lost his way in the current RPL draw in Akhmat. “The situation with Agalarov was really before our eyes. We tried to analyze why it didn’t work for him, if this could happen again with Sychev. Vladimir didn’t play much at a high level, but we thought he had enough qualities not to let him stop. This is passion, physical strength and goalscoring talent”, said Igor Osinkin, technical director of the Samara team, in an interview with Metaratings.

In conclusion, I wish that Vladimir does not repeat the fate of Agalarov and maintains his shelling enthusiasm in Samara. And the pretty “Orenburg” to find a worthy replacement for it.