HomeSportsVHL took revenge on the Belarusians for the First Canal Cup and...
Sports 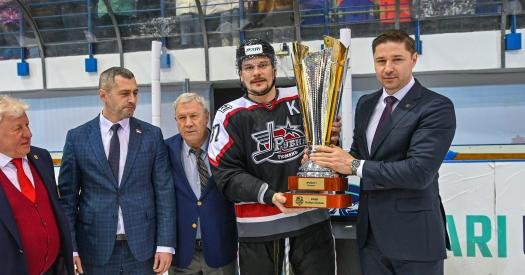 While the path to international tournaments is closed for Russia and Belarus, the hockey federations of the two countries decided to organize their own competitions between teams of different levels.

The national teams have already been able to measure their strength within the framework of the First Channel Cup, during which, by the way, an additional agreement to the Memorandum on deepening hockey cooperation between Russia and Belarus was signed.

And now the agreements have already begun to be implemented. The proof is the PARI Union Cup tournament, which took place this weekend in Belarusian Zhlobin. 4 teams took part in this new hockey battle: the champion and finalist of the VHL PARI, as well as the two strongest teams of the Belarusian Extraliga: Rubin (Tyumen), Dynamo (St. Petersburg), Metallurg (Zhlobin) and Yunost (Minsk). ).

WHAT IS THE BEAST?

The tournament consisted of two competitive days, each of which featured two matches. The first day – semifinals with teams from different countries, the second – the game for third place and the final. This brevity is explained by the fact that the championship is in full swing in the leagues.

For Zhlobin PARI, the Union Cup became a real event. Huge banners announcing the tournament were hung throughout the city, music was played at the Ice Palace, game tickets were sold at affordable prices, stadium buffets were overflowing with fresh cakes, and activity for all ages was expected at the the hall.

A special event for local fans was the opening of a merchandising store; and here and there you could see people in scarves and hats with the image of a wolf – the symbol of Zhlobin Metallurg. By the way, things with the symbols of the tournament appeared on sale, which once again emphasized their importance.

ROAD TO THE CUP

The Minskers reached the Cup without the most powerful team. For example, your goalkeeper. Alexander Zenyuk and spent his first match at the adult level. And, despite the defeat, the debut of the “Youth” goalkeeper cannot be called unsuccessful. He kept his doors closed until third period. But a powerful last segment of the game allowed Rubin to earn a ticket to the final. at minute 42 Dmitry Lyutov he was finally able to respond to Andrey Pavlenko’s record, completing a spectacular combination. Five minutes later Kirill Koshurnikov put Tyumen ahead, and the goal Dmitry Zaitsev make a point. 3:1 – Rubin victory.

The second game of the first day of play did not please with the extravagance of discs. Metallurg and Dynamo tormented each other for a long time, trying to figure out who deserved the final. But it was all decided by a single moment made in the performance. Ilya spat. 1:0 – Victory for Metallurg.

This result pleased the local public very much. Metallurg and Rubin met in the final. Two champions in the fight for the first PARI Union Cup. Tickets for the afternoon meeting sold out faster than pancakes!

The second day of play began with a bronze match, the hero of which was Vladimir Rovba. His double lifted Minskers to third place in the tournament. St. Petersburg hockey players were able to respond with just one puck Alexander Komaristy. 2:1 – bronze in “Youth”.

“It’s good to dilute the season with games against teams from the VHL. It is interesting to play with representatives of different leagues, to assess the level of our superiority. I think it’s worth holding these kinds of tournaments.

Today we managed to score two necessary goals and we did not make the mistakes of the last game. He helped us win and win bronze.”

Forward of St. Petersburg “Dynamo”, Ivan Larichev He also summed up his team’s performance in the tournament:

“We came here to win, but it didn’t work out. The match for bronze was even, but we brought our own goals. Two mistakes led to defeat. The coach said they got on the gate a little bit. In two games we had chances to convert, but we couldn’t take advantage of them. It’s annoying. We will prepare for the matches of our championship”.

The final match drew a full house. Even so, the inhabitants of Zhlobin came to support their native club in the fight for the Cup. The match was attended by 2,100 spectators with the official capacity of the palace in 2018 people. It should be noted that Rubin was not left without support. Fan Anton he overcame a considerable distance to be present at the games of the Tyumen team. He flew from Tyumen to Moscow, and from there he got to Zhlobin by train:

“I will not overcome such distances to get to the match of my favorite team. I could not miss such a tournament and I do not regret at all that I came to Zhlobin. It will not be easy in the final, you will have to shout for the whole stadium, ”the excitement of him was shared by a hockey fan, who is seriously approaching the upcoming confrontation.

Does Tyumen Rubin need additional motivation? He represents a country whose players are among the elite of world hockey. The Tyumen club is the current PARI VHL champion.

Metallurg also has a champion title. He also represents his country in the final, and according to the Zhlobin hockey players, they feel responsible as hosts of the tournament. In addition, the victory in the Pari Union Cup can give the team the necessary impetus – now in the Extra League “Belarusian steelworkers” are in seventh place, which is uncharacteristic of the champion.

The fight for the Cup was spectacular. The stands pushed their team forward, but the guests were not going to give in either – a championship derby!

The scoring was opened by the Rubin striker Dmitry Lyutov. The hosts managed to equalize only at the end of the second period, where the most efficient was Alexey Mikhnov, who managed to beat the Tyumen goalkeeper, suddenly coming out from behind the gate.

But the score did not stay the same for long: the striker Nikita Popugaev puts Rubin ahead. “Steelworkers” desperately resisted, in the end they took away the goalkeeper and went on the attack, but this was not crowned with success – “Metallurg” got the record of Nikita Mokina in some gaps 3:1 – Rubin victory. The Tyumen club, the current champion of the PARI VHL became the owner of the first PARI Union Cup. Some kind of revenge for the First Channel Cup!

The best players of the tournament were not left without individual prizes:

The best scorer of the competition – Nikita Mokin (“Rubin” Tyumen).

EMOTIONS OF THE FINALISTS

Forward of “Metalurg” and most valuable player of the tournament, Alexey Mikhnov was, despite personal achievements, was upset:

“Today’s game is already history. Unfortunately, lately we have problems with the implementation, we only scored one or two goals. And my goal did not bring results for the team. The tournament turned out to be good, I think it will help us finally break through and start realizing our chances, since they are there, there will be goals.”

The opposite atmosphere was experienced in the winners’ locker room, where music and exclamations of triumph were heard. The striker shared his state of mind German Nesterov:

“Thanks to the organizers for such a tournament. We were distracted from the championship, and the matches here helped us find our game, which hasn’t been going well lately. The intensity today was like in the playoffs. It’s great to play in full stands, they put pressure on me. But our fans were there too. Have you touched the Cup? Yes, it’s international, so no superstitions!”

The coaches of the finalist teams shared their impressions of the match and the tournament:

“We’re happy with the win,” says Rubin’s mentor Denis Yachmenev, -It’s great to play in such an environment: fans, drums, packed stands. I liked the tournament, these two days passed quickly. We tried something, we spied something on our rivals. All this will be useful in future matches.”

“I am very pleased with the incredible dedication of hockey players from all teams,” says the Metallurg head coach. Dmitry Kravchenko, – Such tournaments give a great impetus to the development of hockey coaches and players. They should be held annually, and not only in Belarus, but also in Russia. We want to compete and learn new things.

Today we lost in the game of advancement, both in movement and in thought. The strongest won. But I can’t blame my boys. Thank you very much to the fans for such an atmosphere.”

Well, are such tournaments necessary? Probably, if something similar had taken place in a larger city, “spoiled” by the KHL or just a large number of pastime options, the competition could have been held in a more intimate format.

For cities like Zhlobin, who loves his team and hockey, such an event becomes really great. Therefore, why not please the loyal fans? Yes, and for practice and exchange of experience it is suitable.

Share
Facebook
Twitter
Pinterest
WhatsApp
Previous article
Why are prices for private houses in Magadan growing, and in the Crimea declining? – Rossiyskaya Gazeta
Next article
Rain of bank dividends on the stock market before the bell rings for 2022