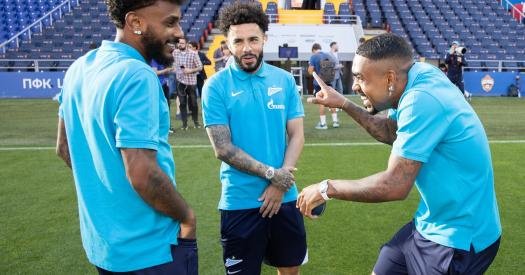 While the World Cup brought fans to television screens every night, scouts and club leaders went about their business, including coming up with options to strengthen teams. “Soviet Sport” presents a summary of transfers, collected from facts, rumors, inside information.

Goal informs that Palmeiras will hold talks about the transfer of Claudinho in the coming days. The Brazilians know that the midfielder is prepared to return to his native land, also due to Zenit’s absence in European competitions, and for this reason they are willing to offer around 15-17 million euros. This is a lot for the current financial situation of RPL, but not enough, given the 12 million euros invested in it and the clause in the contract, according to which Saint Petersburg must return 20% of the sale to Claudinho’s former club, Red Bragantino bull. Claudinho’s contract, which runs until 2027, adds to the problems in the negotiations, so Zenit is in a better position before the start of the discussions.

Claudinho’s departure could set off a chain reaction that would at least make other Brazilians consider leaving as well. And if Zenit don’t want to let them go, then you can’t rule out the option with a kind of Brazilian rebellion, which happens in this kind of situation.

The Spanish brand ensures that Spartak returned to the candidacy of Nemanja Maksimovich, who was interested in the Moscow club in 2015, when he was still an Astana player.

Since then, a lot has changed in Nemanja’s career, who came to play for Valencia, and the Serbian defensive midfielder has played for Getafe for the last five seasons. He is still relatively young (27 years old), but at the moment it is not clear why Spartak needs another defensive midfielder in the presence of Nail Umyarov, Christopher Martin Pereira, Roman Zobnin, Danila Prutseva and some other players who can play in this one. position.

In my opinion, Spartak has other positions that need to be further strengthened.

For several years in a row, Ilya Samoshnikov has been paired with big RPL clubs, and finally, this transition is close to completion.

First, the journalist Sergei Ilyev said that Lokomotiv agreed with Rubin on the transfer of Ilya for 1 million euros, and then the player’s agent confirmed the information.

Barcelona, ​​who played it all out last summer, can no longer afford to spend tens of millions of euros on newcomers and therefore plans to focus on free agents. According to Diario Sport, Ngolo Kante cannot agree with Chelsea on a contract extension that ends in the summer of 2023, which means that already in January the French midfielder has every right to sign a preliminary contract with a new club.

Kante has several offers, but the most interesting for him is from Barcelona, ​​who see Ngolo as a replacement for Sergio Busquets in the support zone. Negotiations are complicated by the uncertain physical condition of Kante, who has played just 175 minutes for Chelsea this season due to serious injury.

Share
Facebook
Twitter
Pinterest
WhatsApp
Previous article
Political: Pentagon may start training Ukrainian military to run Patriot in US KXan 36 Daily News
Next article
Mom is a Playboy star, dad is an actor: DiCaprio’s new lover is just 23 and from a famous family