HomeSportsWe need a defensive midfielder, a striker and a "uncle" for the...
Sports

We need a defensive midfielder, a striker and a “uncle” for the youngsters. CSKA tasks for winter 2022/23 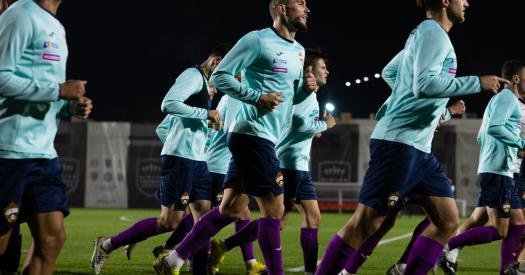 It is difficult to understand how many reasons there are for rumors of interest in these players from other clubs. More precisely, there is no doubt about the very fact of interest, but the prospects for such a transition are rather dim. However, we fix: Igor is the most reliable defender of the army team, and Jorge is by far the most notable creator, so his departure would be a very significant loss.

However, the Red-Blues themselves are quite confident that Diveev will stay. The Turkish coast is a weak motivation for him, and Zenit is too principled an opponent. Yes, and Evgeny Giner in the camp of the main enemy will certainly not let his player go for money.

With the Colombian it is more difficult, if only because Flamengo, Corinthians and, according to his agent, even Atlético are experiencing varying degrees of interest in him, and that is a serious reason to consider a change of scenery. There are rumors that Jorge might even try to suspend the contract with CSKA. Such an outcome seems unlikely, since before the start of the season he signed a document renouncing this FIFA-granted right, but who can guarantee any kind of legal reliability in these troubled times?

Strengthen the center of defense

The transfer of Ilya Agapov from Paris NN for 1.3 million euros aims to solve this problem. In the previous club, the 22-year-old defender played a prominent role in breaking out the defense. For example, he entered the top three central defenders in the RPL in terms of moving the ball forward, and in Nizhny Novgorod only midfielder Mamadou Maiga passed more often than him. And he was often the one trusted to make long passes (3.8 per game, more than just goalkeepers). Agapov also has a good left foot, and such players are always in short supply.

At the same time, his defensive abilities weren’t impressive at all. And if in a positional attacking game he can become a good option for Vladimir Fedotov, then how much he will be able to prove himself in a much higher line of defense than in HH is a big question. It is significant that in the selections for the match (1.0) in Pari NN, he was already 13 in the fall!

It is worth adding that Fedotov loves schemes with three central defenders, that is, his first option will be the Agapov – Diveev – Willian Rocha trio, and the second – Vadim Karpov – Matvey Lukin – Dmitry Kaptilovich. With all due respect, 20-year-old Karpov has not yet managed to convince us that he is a player at the level of the main CSKA. So the coach needs another good player for this position.

Dealing with the support zone

The Red and Blues have been buying players for this position for years and testing many options. Only since 2018 have Ivan Oblyakov, Ilzat Akhmetov, Yaka Biyol, Kristian Bistrovich, Baktiyor Zainutdinov, Konstantin Maradishvili, Emil Bohinen, Jean-Philip Gbamin, Sasha Zdelar, Victor Mendez and Maxim Mukhin managed to play here. And only the latter looks harmonious in this role.

In my opinion, the selection service failed again with Zdelar and Méndez. It is no coincidence that according to Whoscored, the Serb ranks only 15th in the team, and the Chilean is 19th at all. In the presence of Mukhin’s “bulldog”, it would be logical to cede second position to box-to-box, capable of covering the entire central axis of the field from the penalty area to the penalty area, helping one or two attacking midfielders. internals to create an overload in separate zones. Neither Zdelar nor Mendez are strong on this. It is noteworthy that Mukhin has more passes under attack in the fall (0.9 per game) than his teammates (0.6-0.7).

The ideal scenario would look like this: sell both for an estimated total cost of around 6.5 million euros and buy one, but really worth this money.

Fedor Chalov’s career is reminiscent of American racing, but in whatever form it is, he remains the only serious candidate for the role of spearhead, because Anton Zabolotny and Adolfo Gaich are more meme-inspirers than real scorers.

For two in the fall they spent a little more than 200 minutes on the field and scored one (!) Goal. At the same time, Chalov is second only to Milan Gaich and Zainutdinov in terms of playing time among outfield players, proving that he has no alternative to the coaching staff. Do we really need a few more calculations to realize that the team needs another sensible striker? Then Gaich and Zabolotny can be solemnly released.

The army team traditionally has a fairly young team, in which there are only four players over the age of 27 (!) years. And of these, only Igor Akinfeev succeeded as a great player, while Kirill Nababkin, Georgy Shchennikov and Zabolotny, even in their best years, were not significant figures in Russian football and do not have enough authority.

And they are not the players of the starting lineup, so in fact there is not a single experienced football player on the field who can sometimes stimulate, calm down or guide others, and somewhere to engage in a skirmish with an opponent to slow down the game. The lack of such a player was especially felt in October-November during the 8-match period, which included only one victory. And the result of these failures was fifth place in the table, six points behind Rostov, third.

Share
Facebook
Twitter
Pinterest
WhatsApp
Previous article
“Our father Shuisky died!”: A priest who saved the wounded was killed near Artemovsk
Next article
The aviation sector trusts green hydrogen as the fuel of the future