HomeSportsWell done, Roman Rotenberg! Now no one dares to ridicule the...
Sports

Well done, Roman Rotenberg! Now no one dares to ridicule the comparison of the SKA coach with Anatoly Tarasov 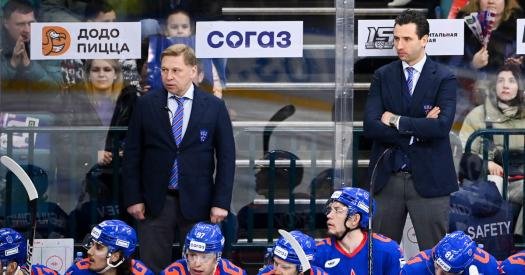 It is surprising how much highly intellectual mura I read in the media of various trends, after the residents of St. Petersburg and the Black Sea confirmed the lease until the end of the season of the most promising Russian player of the generation. According to scouts, in the 2023 NHL Entry Draft, the SKA/HC Sochi forward is sure to break into the top 3. The kaleidoscope of nonsense in the notes about this long-awaited move is mind-boggling. From “they decided to rot the rarest talent in an outside club” and “this is a blow to the competition and reputation of the KHL” to “why the hell does Sochi need it?” and “in the tropics he won’t have anyone to play with.”

In general, once again I enjoyed tons of fancy nonsense like “reducing the legionnaire limit from five to three migrants is nonsense and the murder of our hockey”. But these endless fans will unfortunately never guess why the Canadian youth team dominates the world championships. Unfortunately, they are too lazy to know that in the Canadian Youth League (Ontario, Quebec, West) the limit for Europeans is one and a half times stricter than what the KHL is still going to do: two foreigners per club. Goalies from across the ocean some time ago were even banned from the draft! And no one complains that the level has dropped. That the competition is low. That the open market will destroy everything. Figushki!

But let’s move on to the hockey student from Perm. I could somehow understand this thermonuclear escape of bullshit and madness from the ignorant, if it were not for the movie “Legend No. 17” watched by millions. No, I do not want to say that if it were not for this photo, with the name of Kharlamov, they would answer you on the street: “Is this the one they call Bulldog, or something like that?” We are talking about the exile to Chebarkul of the future executioner of “professional vaunted Canadians.”

Everyone was watching. They all remember. Everyone knows how it ended for Valery. Well, one and one can be dubbed or without a hint in any way?

FHR President Vladislav Tretyak compared Roman Rotenberg’s working methods at SKA with those followed by Anatoly Tarasov throughout his coaching career. In the sense that the current SKA head coach in the team is the same king and god that Tarasov and Tikhonov were in the USSR under the USSR, Chernyshev in Dynamo, Kulagin in Krylya Sovetov, Epshtein in Khimik … What is seditious here? Absolutely true commentary from the greatest hockey player of the 20th century.

Michkov’s lease only further confirmed this observation. After all, this is nothing more than a remake of Kharlamov’s business trip to the Urals! This is how Rotenberg himself explained the transfer of the most talented striker to him:

– We believe that leasing at this time is the best solution for both the player and the club. Matvey actually plays in the VHL. He surpassed the MHL. But in the main team now there is very serious competition.

We demand a lot on the physical condition of the players so that they can maintain a high pace during the three periods. Create constant pressure in attack and play reliably in defence. Matvey knows what components he needs to work on and where to add.

We could leave it at SKA-Neva. But we decided that it would be much more useful for Michkov to gain invaluable experience playing in the KHL. I am sure that in Sochi he will be competitive. He will be able to prove to the coaches his right to a good ice time. Playing for Sochi will help you get used to the speed, the level of stamina and the fight in the league.

Renting until the end of the season in this sense is an excellent option. We hope that this experience will be most useful for Michkov, and next season he will be one hundred percent ready for the KHL…

Everything is laid out neatly and clearly. Personally, I support this decision with both hands. Exactly 55 years ago, on the same plot, Anatoly Tarasov sent an unnamed 19-year-old CSKA serviceman to Chebarkul Zvezda. So that in half a year there she grew stronger, matured, believed in herself, a world hockey block with the number 17 on her back.

So I am perplexed: what is there incomprehensible, cloudy? Where are the traps here, especially the persecution of the young man? This is the only true measure, repeatedly successfully tested on the home drive.

Yes, Zvezda played in the third division then, and HC Sochi is in the elite. But everything in our world is relative.

The Southern Club is now the worst of the 20 Russian teams in the KHL. And what happened in the winter of 1967? When Kharlamov led Zvezda to first place in the second league, allowing them to get promoted to the first league the next season. In the major leagues, 11 of the 12 teams are Russian (except Dynamo kyiv). In the first league – 9 out of 12 (except Torpedo Minsk, Torpedo Ust-Kamenogorsk, Dynamo Riga).

So it turns out that in that championship of the Soviet Union Zvezda, according to the results, was the 21st Russian club. If we take into account that we now have players for at least three teams abroad, then HC Sochi-2022 can be equated to Zvezda-1967 in full.

What gave Kharlamov (and Alexander Gusev) a four-month internship in the Urals, everyone knows the above-mentioned blockbuster well. Less has been said about the incredible hockey boom that suddenly arose in Chebarkul, a worker and military city. But 19-year-old Valera instantly fell in love with all the Urals. Families began to flock to him especially, and he scored and scored. As a result, Zvezda never gave first place to anyone.

I am convinced that the same explosion of interest in the game on ice should break out in the capital of the 2014 Olympic Games with the appearance of a young hockey wizard in it. Who is now curious about HC Sochi? None! Even countrymen. No traditions, no results, no big names.

They tried to attract the public by inviting the scandalous Andrey Nazarov. However, all his miserable and vulgar fights, which he forced his wards to lead, were fed up with everyone in the summer to such an extent that the KHL threatened the violent professor: “Throw this disgrace again, do not expect mercy from the League! !”

There was nothing else in the coaching arsenal of the former NHL tough guy, and no one needs ideological wrecks and career losers. That is why Nazarov has not been near the Black Sea for a long time.

The current coach of the resorts, Sergei Svetlov, should work with Matvey and explain, show and correct him a lot. Born in the capital’s Dynamo, he is an outstanding Soviet hockey striker. He was distinguished by speed, technique and plasticity, an ideal work ethic, elegant skating, he always looked for partners and the team. In short, according to Tarasov, an exemplary member of the Komsomol. Olympic champion in 1988, world champion in 1986, participant in the Canada Cup in 1984 and in the final three-game Canada Cup mega-series in 1987. This is exactly the specialist Michkov needs most now. Svetlov can say and most importantly – to demonstrate with his own hand on the ice any technique, feint, maneuver.

– In a difficult time for us, we are grateful to SKA for the support of such a promising hockey player, – Svetlov himself comments on the unexpected New Year’s gift from the northern capital. – Any KHL club and coach would like to have such a talented hockey player, we will work. Matvey can have no doubt that we will all support him. We must not forget that there are many talented young people in Sochi, the competition is serious. And this, with all due respect, is not the MHL and VHL, but the Continental League, where in every episode there is hard, professional hockey. Everyone should be ready for such a competition.

Excitement in the press for the transfer of Michkov? Excessive media attention in our century has never bothered anyone. This is a good transfer not only for our club, but also for the KHL, for Russian hockey in general. We are sure that Sochi will help Michkov. We hope that Matvey, in turn, will definitely help our team. Each of us must spend the second half of the season better than the first.

Matthew has very interesting hands. He was allowed to score authorial goals at the age of 16 even at the level of the Russian national team. You can’t accidentally score a lacrosse goal against the Swedes, the talent is obvious. But talent is only one of the success factors in modern hockey. The other is impeccable physical condition, fast and accurate skating, effective actions on both sides of the court, work ethic. The experience of the NHL itself shows that dimensions in modern hockey are not the main thing, unlike skating, speed and functional training…

So, the completely anonymous and unnecessary HC Sochi with the arrival of 18-year-old Matvey will become the most intriguing club in the KHL. At least for me. I will try to follow every game of the Ural star in a new place. I’m sure Michkov’s signature lacrosse goals won’t keep you waiting.