Stanislav Sadalsky is ready to sue Lenkom, defending the “truth” 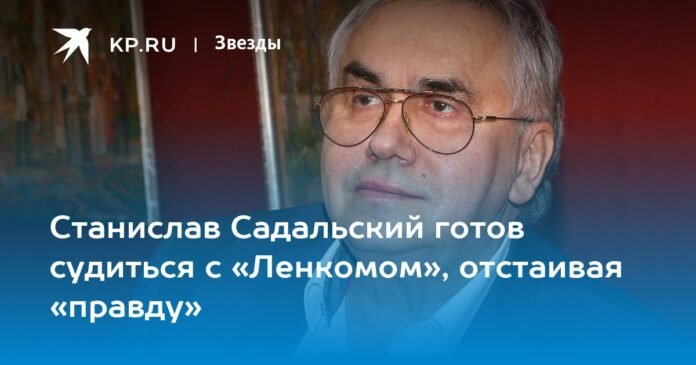 Against the background of a sluggish news schedule in the field of “cultural life”, a scandal broke out between the artist Stanislav Sadalsky and the administration of the Lenkom Theater.

– Sasha (Zakharova) was expelled… Varshaver expels Sasha. All of Moscow is talking about it, – Sadalsky said, choking on words.

Although in reality Alexandra Zakharova still works in the theater and acts. Yes, not as often as she was with Mark Zakharov. But Alexandra Markovna had to understand that it would not always be the same as with her father …

In its social networks, the theater gave a rebuttal to Sadalsky’s words:

“Maybe Sadalsky is an illusion, but Alexandra Markovna continues not only to act in performances of the Cherry Orchard Theater and The Marriage of Figaro, but also receives quite a decent salary of 158,000 rubles a month. In addition, she receives a pension and a monthly allowance of 30,000 as a People’s Artist of the Russian Federation. Then no one encroached on the status and financial position of the famous actress. Unless Sadalsky himself and publications spreading lies. The theater is forced to file a lawsuit for these facts “…

Sadalsky read it and was not silent. On his microblog, he wrote a reply post under the title out loud: “It’s a shame to settle scores with an orphan!”:

“Lenkom (read Varshaver) is going to sue me for defamation.

Allegedly, I said in an interview that Sasha Zakharova was fired from the theater.

Firstly, I did not say that Sasha was “fired”, I said – “survive”, and this is a big difference.

Sasha is an excellent actress and she has only one title – she is the daughter of Mark Zakharov, no matter how sick he is.

Secondly, why was it necessary to express the “fabulous” salary of the People’s Artist of Russia? Everything was calculated, including Sasha’s pension!

So let’s be consistent.

Information about Varshaver’s salary is official, from the website of the mayor of Moscow (annual income for 2021 is more than 24 million rubles, data from open sources – Ed.).

And another question: does a person who holds a managerial position have to declare that they have a second citizenship?

In an interview with Manucharov, Sadalsky actually said: Alexandra Zakharova was not fired, but “kicked out”, which is absolutely ugly in relation to the People’s Artist. Like his words about “offending an orphan”, well, that’s it… Cheap speculation: at 60, it’s no wonder to become an orphan. As for Varshaver’s “second citizenship”, we decided to ask Mark Borisovich directly.

– Another lie from Sadalsky, – Mark Varshaver was outraged. I have never had a second citizenship and never will. I don’t need it. I hadn’t even had such thoughts. I am a citizen of Russia, this is my homeland, which I love. Even more I love Moscow, where I was born. A more beautiful city for me does not exist on earth.

100 years of the USSR. What was it, a great experiment or an incomprehensible blessing? (more)