HomeLatest NewsThe 05490, the number awarded with the Gordo of the Christmas Lottery
Latest News

The 05490, the number awarded with the Gordo of the Christmas Lottery 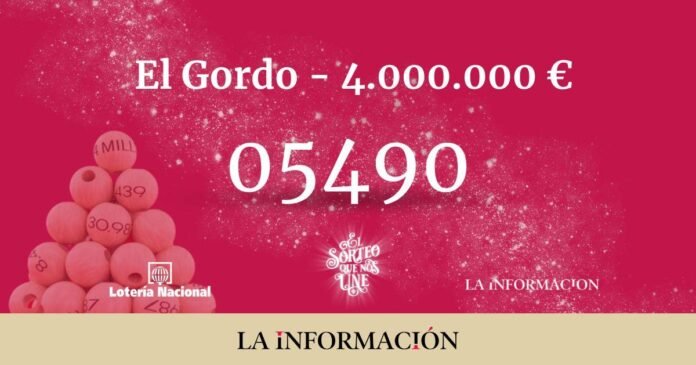 The 2022 Christmas Lottery Draw Jackpot has been waiting for this Thursday, December 22. The winning number is 05490, graced with 400,000 euros for the tenth, it started at 11:21 am on the second wire of the fifth table.

The prize has been widely distributed. Specifically, it has left a total of 150 tenths in Roquetas de Mar (Almería) for a value of 60 million euros, and ten in Seville, representing another four million euros. In addition, Malaga has been graced with two tenths in the capital (800,000 euros), with another in Torremolinos and another in Villanueva del Trabuco.

The first prize of the Christmas Lottery has also fallen to the administration of Avenida Río Nalón number 26 in Los Alcázares; in the one at Trapería street number 13 in Murcia; and in the one of the Perolo in the street Gabriel Cañadas number 17 of San Pedro del Pinatar. As well as in S’Arenal (Mallorca) and Sa Carroca (Ibiza), as well as in Albacete, specifically on Avenida de España, 41; and in the capital Ciudad Real, on calle Alarcos, 1.

How much money does the first prize of the Christmas Lottery distribute?

El Gordo is undoubtedly the most anticipated number of this Extraordinary Draw of the Christmas Lottery. And it’s out. It is time to review all the tenths that we have in our possession and be very attentive because not only the same number that the children of San Ildefonso have sung will have a prize. El Gordo will also reward approximations with 100 euros for each euro played as well as its last two figures (six euros for each euro played) and the last figure (refund). If the first three figures match, the prize is 100 euros for each tenth.

How much money remains in the Fatty’s ranch

The Ministry of Finance will keep 72,000 euros of each Christmas Lottery Jackpot prize, in application of the special tax in force since 2013, with which the winners will receive 328,000 euros for each tenth. This tax is applied in the form of withholding, that is, the additional one itself. According to current regulations, all prizes of less than 40,000 euros are exempt from the special lottery tax, while those that exceed that amount, in addition to identifying the winner, will have to pay a rate of 20% on the part that exceeds this digit.

How much money does Lotteries distribute?

When and where can the Lottery prizes be collected?

Tickets awarded with less than 2,500 euros can be collected from today at any point of sale in the lottery network, while for higher prizes you have to go to one of the collaborating banking entities such as BBVA, Santander, CaixaBank and CECA. In the case of tickets in poor condition or damaged, they must never be rebuilt, but must be sent to the State Lottery and State Betting Society, which will determine whether or not the prize can be collected. Finally, it must be taken into account that the prizes expire in three months from the date of the draw.

Finder of winning numbers in the Christmas Lottery 2022

Check your tenths of the Christmas Lottery in the La Información search engine.

El Gordo of the Christmas Lottery other years