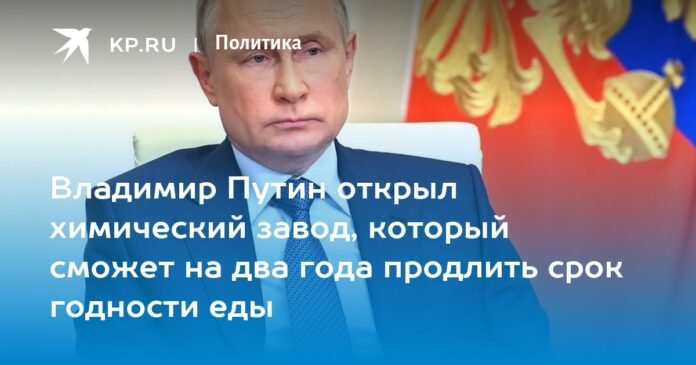 It was necessary to open the production of polymer film by video link.

Initially, Vladimir Putin was planned to personally come to the Pskov region, to the Titan-Polymer plant. Right now it is after the summit of the heads of the CIS in St. Petersburg, it is close. But the weather can change even the presidential plans. As a result, the production of polymer film had to be opened via a video link.

– The design capacity of the plant is about 72,000 tons per year of various types of polymeric products, which are in demand in the pharmaceutical industry, in the manufacture of medicines and food containers, and in other areas, the chief said at the beginning. of State. of the ceremony

But it’s one thing to recognize the importance to the industry as a whole, and another to understand what exactly the company does.

Therefore, when the business owner contacted, Vladimir Vladimirovich asked him a direct question:

– How does the new film differ from other similar materials?

– Barrier properties! Oxygen does not penetrate the packaging and does not allow the products to deteriorate. Perishable items will be stored for another 21 days, and frozen items for two more years, said Mikhail Sutyaginsky, founder of the Titan group of companies.

– How good is your technology? asked the president.

The industrialist replied that the machines could add several properties to the film at once.

– Good afternoon. Let’s get to work! I hope that next year there will be no fewer such launches,” Putin said at the end of the ceremony.