The best and novice sports commentators were awarded at ROC 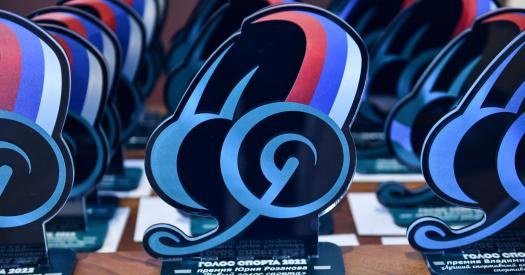 Exactly one week before the New Year, the best sports commentators in Russia, who worked on the most important competitions of the outgoing year, gathered on Luzhnetskaya Embankment. For example, at the Winter Olympics in Beijing and the World Cup in Qatar. TV commentator Roman Skvortsov and three-time Olympic champion in synchronized swimming Alla Shishkina hosted the solemn event.

— I am glad that our business is still alive, and more and more people devote their lives to this fascinating profession, – said Gennady Orlov, President of RASK, opening the evening. – I want to thank the ROC, which supported the idea of ​​creating the Russian Association of Sports Commentators 5 years ago and has been helping RASK ever since. This is a great personal merit of the President of the ROC Stanislav Pozdnyakov. And, taking this opportunity, on behalf of our entire community of sports commentators and journalists, I once again congratulate Stanislav Alekseevich on his election to his post for a new term. This year we started a completely new regional project for us.

Thanks to our partner, SIBUR, we hold a series of master classes in Russian cities, we meet with people who want to become sports commentators. I am sure that soon we will be able to realize our dream and create a commentary art academy.

The figure in the form of a headset with a microphone was presented to the wife of the Olympic champion in cross-country skiing, Tatiana, and Guberniev sent a video greeting from Ryazan, where he works these days in biathlon.

“Match TV” commentator Kirill Zemskov became the owner of the “New Voice of Sports” award, named after Yuri Rozanov. The statuette was presented to the winner by the daughter of Yuri Albertovich Ksenia, who could hardly hold back tears, remembering the creative path of her father.

– I am glad that the awards were received today, including commentators working in not the most recognized “small” sports. It is not easy to talk about such disciplines, about their heroes and stars, because they come to the screens only once every four years, – said Kirill Zemskov.

In honor of the centenary of Nikolai Nikolaevich Ozerov, the founder of the profession of television sports commentator, RASK established a special award. Gennady Orlov and Olympic football bronze medalist Evgeny Lovchev became its owners.

– The retinue plays king. So, like all athletes, I have always been played by commentators, – said the famous footballer. “They made us heroes, thanks to their work, all of Russia knows about us. For example, when I was rewarding the participants of the courtyard football tournament in Volgodonsk, a little boy came up to me and said: “I know this guy, they show him on TV, he screams all the time.”

The special prize “At 100!”, established by the Moscow football club “Dynamo” in honor of the 100th anniversary, which will be held in April 2023, was awarded to commentators Dmitry Derunts and Ilya Shelogurov.

— It is not by chance that Dynamo is nominated for this award, — noted Ilya Shelogurov. – This club was at the origins of sports commentary. We all remember the famous phrase of Vadim Sinyavsky: “Our microphone is installed at the Dynamo stadium. He always pronounced it with great trepidation, because the first live broadcast of a football match was carried out from the arena in Petrovsky Park.

The Yevgeny Mayorov “Best Reportage” award went to Sergei Shipov, who emphasized that this award belongs not only to him, but also to his teachers, who work in competitions not only in chess, but also in other sports.

– In my chess reports you can always hear elements of other sports: “The pawn goes over the edge, hangs in the center, where the horse fight takes place.” The game continues for a long time, the grandmaster thinks about the move for about thirty minutes, and the commentator must complete this long pause. We have to talk about everything in the world: about the latest in cinema, science, football and other areas of life,” shared Sergey Shipov.

“In team sports, breaks play an important role,” said Alexander Tkachev, who is temporarily not working live for health reasons. – A true master can “in a pause” beat an opponent. And I came to the conclusion that in our creative profession, breaks are also extremely important: sometimes it is necessary to take them and be happy with what we have.

“In 2004, I was chosen the best sports journalist of the year, and immediately after the award ceremony I went to work,” Grigory Tvaltvadze recalled. -And Viktor Gusev then issued an amazing phrase: “A happy man, he has a job.” And while we have work, we are alive, we breathe, we create.

– I worked for Vladimir Maslachenko, in fact, as a machinist: I helped him quickly write texts for an analytical program. And the main lesson that I learned from our communication is to always be yourself, look for your voice. In this search and I am to this day.

As for Vadim Sinyavsky, when I studied journalism, I wrote a term paper about his work. And I learned that in radio reports he always embellished reality. The question of whether commentators can do it today worries me to this day, – said Roman Trushechkin.

The Naum Dymarsky Prize for a significant contribution to the development of Russian sport “Champion” was awarded to the Internet portal “Championat.com” and the online project “Strong Figures”.

“It is a great honor to be the Ambassador of the Festival of Strong Figures and to receive this award,” said Sofia Velikaya, a three-time Olympic silver medalist in fencing. – We give amateur athletes the opportunity to try new sports and discover their potential, communicate with each other, find new friends.

The best commentator on the 2022 FIFA World Cup, which ended exactly one week ago in Qatar, was Dmitry Shnyakin. He received the award, which was named after Vladimir Pereturin.

“I had to ask my wife to go to Qatar, because two months before the start of the tournament we became parents for the second time,” the commentator emphasized. – It was an incredible trip, it was not easy to work in so many games. For me, this business trip is a new level. And I really want all of us to be able to become real friends with our viewers.

For the first time in the history of RASK, novice sports commentators from all over Russia were recognized. Especially for them, with the support of SIBUR, one of the leaders in the petrochemical industry, the Voice of Sport – SIBUR award was instituted. The winners were Anastasia Kurochkina (Ufa), Leonid Romashchenko (Novosibirsk), Evgeny Semenkin, Olga Gulyaevskaya (both from Saint Petersburg) and Andrey Kazak (Nizhnevartovsk). In addition, out of competition, the jury highlighted the work of Marat Ismailov (Moscow).

“I fell in love with my sport precisely because of the talent of the commentators,” said Sergey Bykov, European basketball champion, SIBUR ambassador. – Therefore, I am doubly pleased that SIBUR has become a partner of such a necessary and useful educational project, designed to open the way to this interesting profession for young people from all over Russia.

Those present honored the memory of colleagues who have made a significant contribution to the development of sports television. As Alla Shishkina noted, thanks to the archival chronicle, the voices of people who were at the origins of the profession will forever remain in the sports history of Russia and in our hearts.

Vladimir Stognienko became the winner of the People’s Voice of Sports nomination. Voting took place on the website and on social networks of the Internet portal “Championat.com”, the information partner of the Prize. More than 38,000 people participated in it.

“Last year, I commented very little and worked mainly as editor-in-chief,” said Vladimir Stognienko. – But people vote, so that they remember and like the reports from previous seasons, which, of course, is very nice.

The “Voice of Sport – Country” award by Alexander Ivanitsky went to Yekaterinburg this year. Boris Abolin became its owner, quoting Boris Pasternak’s verse “To be famous is ugly…” during the award ceremony.