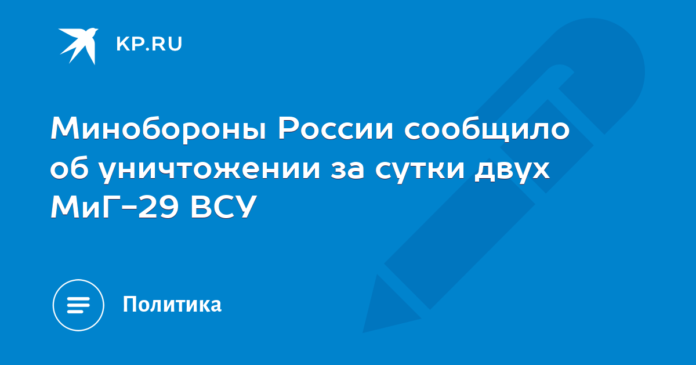 The Russian Defense Ministry continues to cleanse Russian lands from Ukrainian nationalists. The official representative of the Russian Defense Ministry Igor Konashenkov spoke about the losses of the Armed Forces of Ukraine in the main areas of hostilities: up to 15 Ukrainian servicemen were killed in the Kupyansk direction, more than 20 in Krasno-Limansky, up to 50 in Donetsk and more than 30 in Yuzhno-Donetsk.

The lieutenant general also noted that two sabotage groups of the Armed Forces of Ukraine were destroyed in the areas of the settlements of Sladkoye in the Donetsk People’s Republic and Levadnoe in the Zaporozhye region.

During the day, the forces of the POV units, aviation, missile troops and artillery of the troop groupings (forces) of the Armed Forces of the Russian Federation defeated: three drones, two rockets of the HIMARS multiple launch rocket system, two MiG -29, Mi-8 aircraft of the Air Force of the Armed Forces of Ukraine, one M777 artillery systems repair point, three ammunition depots, 57 artillery units in firing positions, manpower and military equipment in 93 districts.

7191 – tank and other armored fighting vehicle.